Home sales dropped 37.3%—the biggest decline since January 2009—in the Greater Toronto Area (GTA) in June 2017 after the Government of Ontario introduced measures to cool the housing market.

Click the image below to view June 2017 vs June 2016 sales and price changes by region and city. 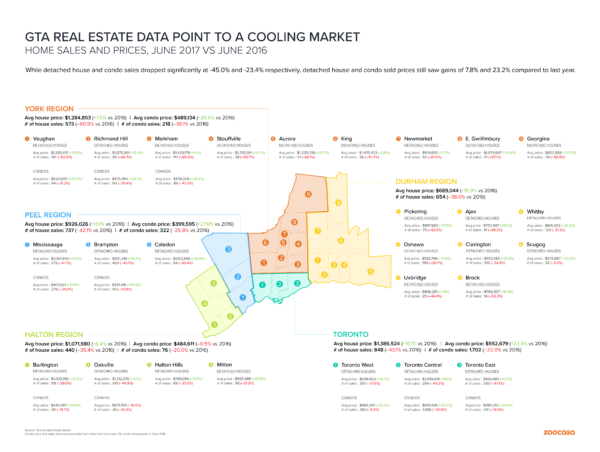 “We are in a period of flux that often follows major government policy announcements pointed at the housing market,” says TREB president Tim Syrianos, adding that some “would-be buyers seem to be temporarily on the sidelines waiting to see the real impact of the Ontario Fair Housing Plan.”

In April, the province introduced a non-resident speculation tax of 15% in the Greater Golden Horseshoe region, expanded rent controls to all private rental units built after 1991, and allowed cities to introduce a tax on vacant homes.

Home sales also dropped by 21.8% on a monthly basis and have declined by 31.4% since April.

The number of new residential listings rose to 19,614 in June, a 15.9% increase compared to June 2016. While this number was sizeable, it was smaller in comparison to the 48.9% increase seen last month.

Following the announcement of the Ontario Fair Housing Plan, TREB commissioned Ipsos to conduct two surveys. One was focused on homebuyers and the other was focused on sellers.

Among homebuyers, 35% said they were very likely or likely to purchase a home over the next year—similar to what was reported from an Ipsos survey last fall. And 40% of likely buyers said they would be first-time homebuyers, a decline from 53% in last fall’s survey. Also, 10% said they wouldn’t purchase a home over the next year, saying the Ontario Fair Housing Plan was a key factor in this decision.

“The recent Ipsos survey results suggest that home-buying activity in the GTA will remain strong moving forward,” says Jason Mercer, TREB’s director of market analysis and service channels. “On the supply side of the market, it certainly looks as though buyers will benefit from more choice in the second half of 2017 compared to the same period in 2016.”

TREB notes that although the impact of the Ontario Fair Housing Plan on home sales may be temporary, it expects borrowing costs to rise. The consensus view is that the Bank of Canada will raise interest rates at least once this year and perhaps more than once.

Taking into account the impact of the Ontario Fair Housing Plan and the prospect of higher borrowing costs, TREB now expects 89,000 to 100,000 home sales this year. In January, the organization predicted there would be between 104,500 and 115,500 home sales in 2017.

How to Make a Complaint to RECO