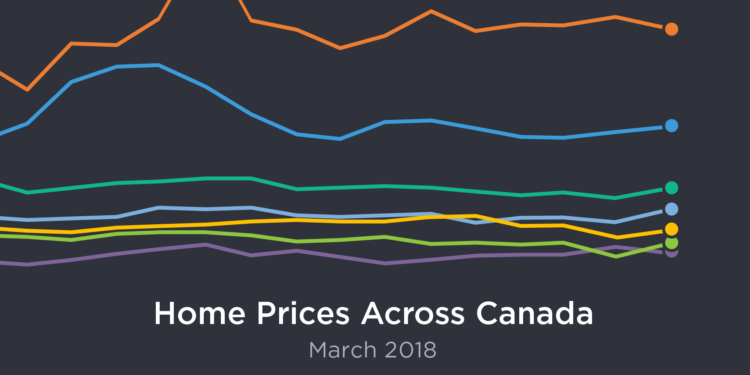 The early spring housing market continues to see slight improvement, with national sales edging 1.3 per cent higher from February to March. However, on a year-over-year basis, they remain 22.7 per cent below the activity recorded in March 2017 – the final month of bubble-like conditions before new policies were introduced to cool Canada’s most expensive markets.

The average national home price was down 10.4 per cent from last year to $491,000 reports the Canadian Real Estate Association, and while the MLS Home Price Index rose 4.6 per cent, its’ the 11th consecutive month the pace of price growth has slowed across the country, and 7 per cent below the 10-year average. Much of the slower activity can be attributed to cooler conditions in the Greater Golden Horseshoe and British Columbia, as both regions continue to adjust to new real estate and mortgage regulations introduced last year. Stripping out Toronto and Vancouver would remove $108,000 from the overall average, and reduce the national price decline to just 2 per cent.

Only Ottawa and Montreal enjoyed an annual uptick in sales; buyers have flocked to the capital city in search of well-priced single-family detached homes, while Montreal may be drawing residual out-of-country buyers due to its lack of a foreign buyer’s tax. However, it appears the busy spring buying season is on track, with sales up from February in 80 per cent of all major markets.

“Government policy changes have made home buyers and sellers increasingly uncertain about the outlook for home prices,” he says. “The extent to which these changes have impacted housing market sentiment varies by region.”

Gregory Klump, CREA’s chief economist, concurs, saying that that the new mortgage rules from OSFI, that require all borrowers to pass a stress test regardless of their down payment size, have effectively slashed affordability for many buyers, requiring them to downsize their purchase expectations. That’s pushed more demand into the condo market, in turn elevating prices, and has softened the market for detached homes.

“Recent changes to mortgage regulations are fuelling demand for lower priced homes while shrinking the pool of qualified buyers for higher-priced homes,” he says. “Given their limited supply, the shift of demand into lower price segments is causing those sale prices to climb. As a result, ‘affordably priced’ homes are becoming less affordable, while mortgage financing for higher priced homes remains out of reach of many aspiring move-up buyers.”

Spring Homes for Sale on the Rise

The number of new homes coming to market ticked 3.3 per cent higher month over month, but have not yet recovered from their dramatic 21-per-cent drop between December 2017 and January 2018, the association reports. However, as there were fewer sales than the addition of new homes, overall market conditions softened further into balanced territory, at a sales-to-new-listings ratio of 53.4 per cent. This ratio, which is calculated by dividing the number of home sales by new listings over a specific time frame, reveals the level of competition in a given market. A ratio between 40 to 60 per cent is considered balanced, with levels below and above that threshold considered buyers’ and sellers’ markets, respectively.

According to CREA, 60 per cent of all Canadian markets remain in balanced territory.

Condos continue to lead the market in terms of price growth, with values increasing an average of 17.8 per cent. This was followed by townhouses and rowhouses at 9.4 per cent. Single-family homes saw the smallest gains, with one-storey houses increasing only 1.3 per cent in value, while two-storey house prices declined by 2 per cent.

BC: Despite slower sales reported as a result of the recently-expanded foreign buyer’s tax and new domestic speculation tax, prices continue to grow on Canada’s Pacific coast, with values soaring 16.1 per cent in the Greater Vancouver Area, 24.4 per cent in the Fraser Valley, 15 per cent in Victoria, and 20 per cent throughout the remainder of Vancouver Island. Much of this price growth is concentrated in the demand for condo and townhome units, while BC house prices remained relatively flat.

Greater Golden Horseshoe: Compared to last year’s historically-hot March, price gains have slowed considerably throughout the region, down 1.5 per cent in the Greater Toronto Area, and 7.1 per cent in Oakville-Milton, thought up 7.5 per cent in Guelph. “These decliens largely reflect price trends one year ago and mask evidence that home prices in the region have begun trending higher,” the report states.

Prairies: Price remained flat in both Calgary and Edmonton year over year, up 0.3 per cent and down 0.5 per cent, respectively. They continued to soften in Regina and Saskatoon, down 4.6 per cent and 3.4 per cent.

Eastern Canada: As reported, Ottawa and Montreal are experiencing strong demand and price growth, up 8.6 per cent and 7.4 per cent, respectively. Greater Moncton prices are also on the price, increasing 6.3 per cent.

A Home-Grown Conundrum: What Homeowners Must Know About Marijuana Legalization