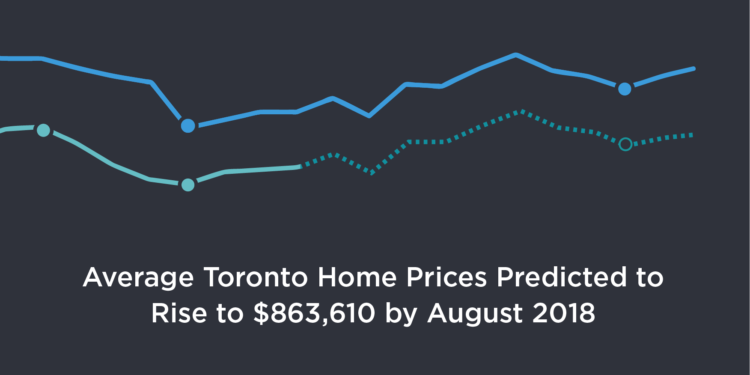 There’s a favourite saying among real estate analysts offering forward-looking forecasts: that no one has a crystal ball.

However, while it’s true it’s impossible to predict unforeseen economic events or policy changes, real estate markets that are driven by similar fundamentals – such as the tight supply and rampant demand present in both Toronto and Vancouver – can set a precedent and offer a potential glimpse of what’s to come when the same housing market policy is applied in both markets.

Perhaps the biggest question on the minds of buyers, sellers, and analysts alike: Will the Toronto real estate market follow Vancouver’s post-foreign buyer’s tax footsteps, with sales and prices rebounding back into record-breaking territory?

All signs point to yes on the figurative data eight ball – according to historical sales and price activity compiled by Zoocasa, should the Greater Toronto Area market perform similarly to Vancouver, the average Toronto home price will hit $863,610 by next August. Check out the year-over-year forecast in the infographic below:

The province of British Columbia made national headlines in August 2016 when it announced all out-of-country purchasers of Metro Vancouver real estate would be subjected to a 15-per-cent surcharge on the total home’s value. Introduced to help improve affordability and discourage real estate speculation in the region, the move prompted sales and prices to drop dramatically, with activity plunging 26 per cent month over month and a whopping 51 per cent from August 2015, according to the Greater Vancouver Real Estate Board. Prices followed suit, hitting a bottom of $833,065 that month.

However, conditions have since turned around with sales recovering 22.3 per cent by August 2017 and prices roaring back 18 per cent to an average of $982,454. That upward trajectory has carried into October, with 3,022 homes sold – a 35.3-per-cent year over year increase.

A Look at Toronto-Area Trends

Meanwhile, in the Greater Golden Horseshoe where a duplicate tax was implemented in April via the Ontario Fair Housing Plan, market watchers wonder if the resulting flux in sales and prices will eventually recover like the Toronto’s west-coast counterpart.

Following the introduction of the 16-point plan, put in place by the provincial government to improve affordability and discourage real estate speculation (sound familiar?), the market took an abrupt turn from the astronomical sales and price growth seen throughout 2015 and 2016. Sales fell 34.8 per cent by August, with the average price softening from the April peak of $920,791 to a bottom of $732,292 – a 20.4-per-cent depreciation of $188,499.

“The housing market in the GTA has been impacted by a number of policy changes at the provincial and federal levels,” stated Jason Mercer, chief market analyst at the Toronto Real Estate Board, at the time. “Similar to the track followed in the Greater Vancouver Area, it appears that the psychological impact of the Fair Housing Plan, including the tax on foreign buyers, is starting to unwind.”