National home sales edged up only slightly in October from the previous month, but fewer homes listed for sale have tipped the market closer to seller’s conditions reports the Canadian Real Estate Association (CREA).

Overall sales activity rose 0.9 per cent from September across the nation, though still 4.3 per cent below last October’s levels, and 11 per cent from the March peak. It was the seventh month in a row that sales have declined year over year.

The number of homes listed for sale pulled back 0.8 per cent, reflecting slower seasonality as well as indicating sellers are less frantic to offload their homes following the introduction of new rules in Ontario. Monthly activity was up in half of all local markets, led by the Greater Toronto Area and surrounding Greater Golden Horseshoe markets as well as Fraser Valley in BC. However, Ontario’s biggest markets are still trending far below last year’s levels, with the GTA “overwhelmingly” contributing to the sales decline. 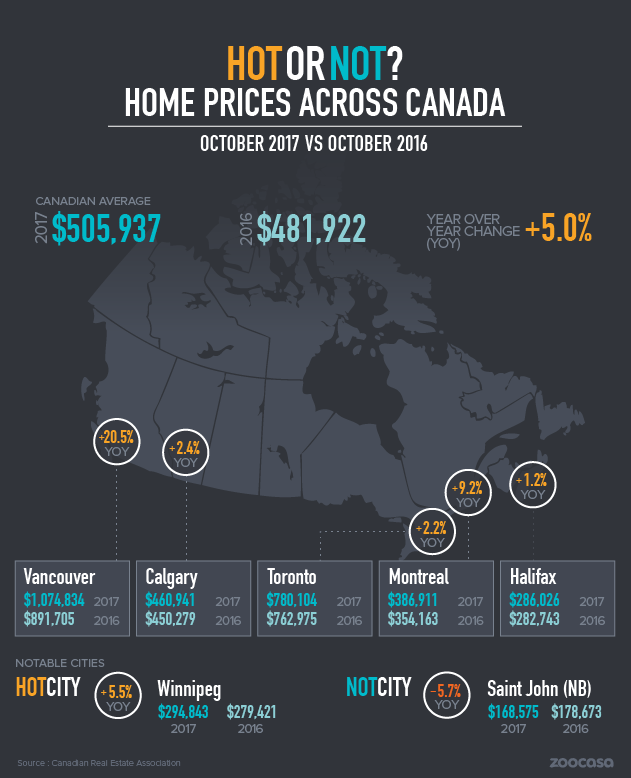 Prices On the Rise, But at a Slower Pace

CREA President Andrew Peck says the short-term uptick could be attributed to looming mortgage qualification rules, which will make it tougher to get home financing once in place in January – buyers may be rushing to get into the market before they’re subjected to stricter criteria, he stated. “Newly introduced mortgage regulations mean that starting January 1st, all home buyers applying for a new mortgage will need to pass a stress test to qualify for mortgage financing. This will likely influence some home buyers to purchase before the stress test comes into effect, especially in Canada’s pricier housing markets.”

CREA’s Chief Economist Gregory Klump concurs, adding October’s growth may be short-lived once the new rules are in effect. He says that should they significantly knock prospective borrowers out of the market, they may have harsher consequences for the Canadian economy than policy makers intend.

“National sales momentum is positive heading toward year-end. It remains to be seen whether that momentum can continue once the recently announced stress test takes effect beginning on New Year’s Day,” he stated. “The stress test is designed to curtail growth in mortgage debt. If it works as intended, Canadian economic growth may slow by more than currently expected.”

While the Ontario Fair Housing Plan and British Columbia’s foreign buyer tax substantially softened Canada’s biggest markets over the last year, national conditions are creeping back into seller’s territory. Fewer homes coming to market, coupled with invigorated sales have pushed the sales-to-new-listings ratio to 56.7 per cent. CREA uses this ratio to gauge how competitive a market is, with levels below 40 and above 60 indicating buyers’ and sellers’ conditions, respectively. The Greater Toronto Area remains balanced at 46.5 per cent, while Vancouver has reheated to a tight seller’s market once again with a ratio of 67.1 per cent.

CREA reports 60 per cent of its local markets remain in balanced territory, with a national inventory average of five months.

While average prices rose across every home type, single-family dwellings continue to see the slowest appreciation, with one-storey houses up 6.3 per cent, and two-storey up 5.8 per cent.

Townhomes and rowhouse prices are up 13.2 per cent, while condo apartments saw the strongest price gains, rising 19.7 per cent, indicating the greatest demand remains for affordable home types, as detached houses remain out of the realm of affordability for many.

Check out Toronto townhouses for sale>

The Pre-Construction Cooling Off Period: What Ontario Buyers Should Know