How Many Homes Can You Buy Across Canada for the Price of One in Toronto?: CREA August Update Ontario’s Fair Housing Plan, combined with rising mortgage rates and tougher qualification rules, has taken a bigger-than-expected bite out of the Canadian housing market, prompting the national real estate association to alter its sales forecast for this year and next.

The Canadian Real Estate Association has made a downward revision to the numbers it predicted in June, saying sales will decline by 5.3 per cent to 506,900 this year. That’s a drop of more than 20,000 homes sold than previously called for. Both British Columbia and Ontario will each see 10 per cent fewer sales in 2017.

However, while sales were down in 60 per cent of all markets in August, the Greater Golden Horseshoe is proving to be the biggest influence, dragging down trends across the nation with its 14.3-per-cent decline.

“Tightened mortgage rules, higher mortgage default insurance premiums, changes to Ontario housing policies and higher interest rates are factors that will continue to lean against housing market activity over the rest of the year and into 2018.”

In the short term, however, CREA’s August numbers reveal a slight uptick month over month, with sales increasing by 1.3 per cent since July. While that’s nearly 10 per cent below last year’s levels, it breaks the fourth straight month of sales declines.

Sales are currently 13.8 per cent lower than the market’s March peak. The MLS Home Price Index rose 11.2 per cent year over year, while the national average price is up 3.6 per cent, to $472,247. Cutting out the Toronto and Vancouver markets, the average price clocks in at $373,859.

Recent changes, such as mortgage stress tests, a foreign buyers tax, and an interest rate hike, have left buyers reeling, suggests the report; while slower sales and price growth are leading to more balanced conditions, the rapid transition has made buyers increasingly trepidatious. Indeed, Andrew Peck, CREA president, says the slight uptick in activity this month could be the result of borrowers racing to lock into pre-approved mortgage rates as interest rates are on the rise.

“Experience shows that home buyers watch mortgage rates carefully and that recent interest rate increases will prompt some to make an offer before rates move higher, while moving others to the sidelines.”

Gregory Klump, CREA’s chief economist, adds, “Time will tell whether the monthly rise in August sales activity marks the beginning of a rebound, particularly in the Greater Golden Horseshoe region and other high-priced urban centres. The picture will become clearler once mortgages that were pre-approved prior to recent interest rate hikes expire.”

While sales are slowing down annually, tighter supply is keeping market conditions from swinging too far into buyers’ market territory.  New listings retreated 3.9 per cent, for the third month in a row, with the greatest declines in the GTA, Hamilton-Burlington, London-St. Thomas, Kitchener-Waterloo, and the Fraser Valley regions. That’s pushed the national sales ratio of new listings to sales to 57 per cent: slightly closer to sellers’ conditions than the 54.1 per cent recorded in July.

A full 70 per cent of markets are considered to be balanced, up from 63 per cent last month, including the GTA where “a decline in new listings has firmed market balance in a number of Greater Golden Horseshoe housing markets, where it had recently begun tilting toward buyers’ market territory,” the report reads.

In terms of available homes for sale, there were five months of inventory across the country in August; 2.3 months in the GGH, a sharp increase from the February-March all-time low of 0.8 per cent.

By housing type, single-detached homes saw the greatest declines in price growth, though prices rose across every home type. As reported by regional real estate boards, lower-priced home types such as condos and townhouses remain in the highest demand: 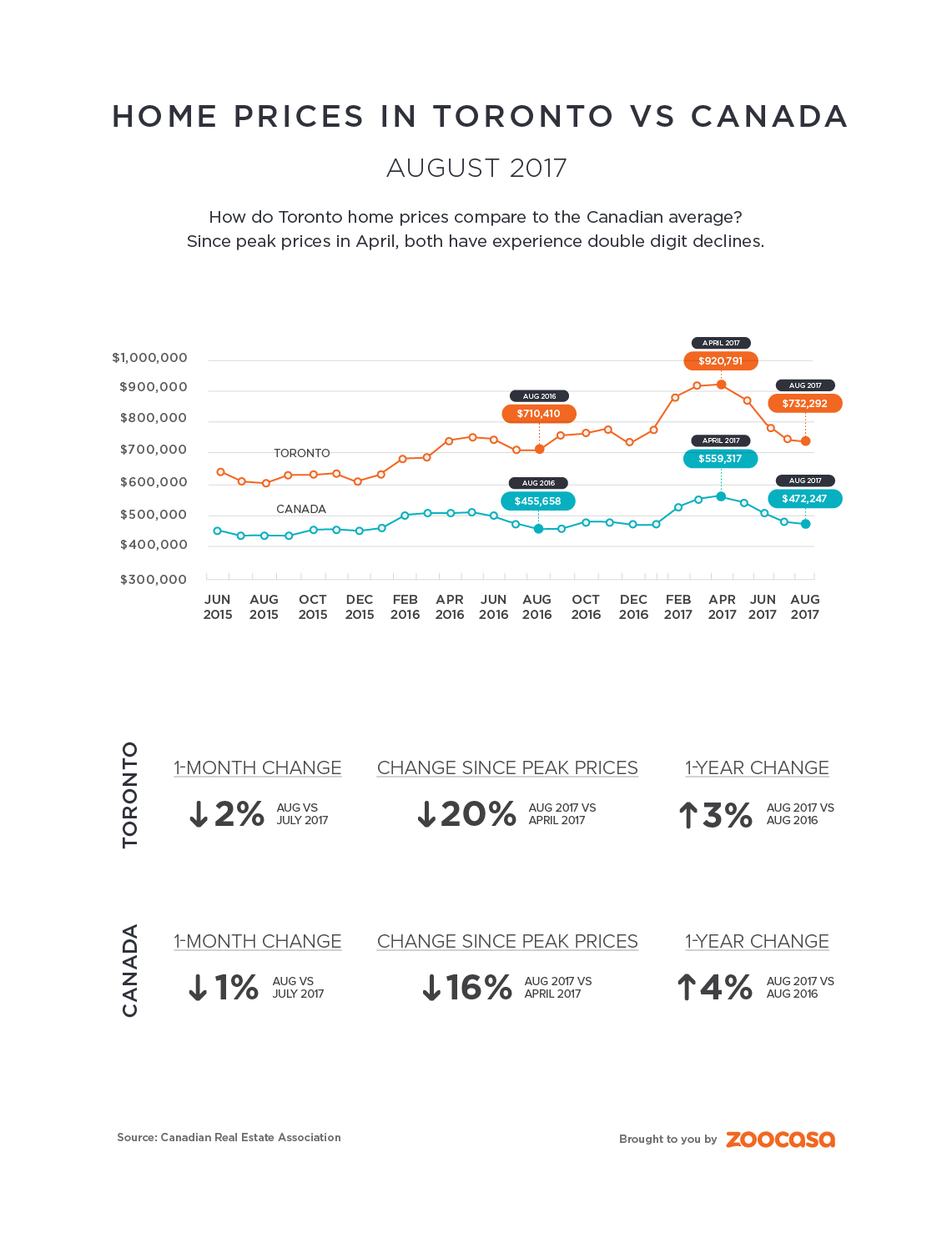 However, despite the slowing conditions seen in the Ontario and Greater Golden Horseshoe markets, affordability there is still much steeper than other markets across Canada. In fact, you could buy nearly five homes in Fredericton, which reported the lowest average home price when compared to what it takes to own a home in Toronto:

How Many Homes Can You Buy Across Canada for the Price of One in Toronto? When Can You Evict a Tenant in Ontario?