Why High-End Brands Are Getting Into Real Estate

by Amanda Reaume
in Buying a Home
4 min read

When you think of a company like Aston Martin, you likely envision cars and not condos –  but the iconic automaker announced in 2016 that it was branching out into real estate with a condo project planned in Miami. That announcement is part of a growing trend of non-real estate companies investing in developing real estate. And that trend is about to come to Canada: the luxury sushi restaurant chain Nobu is in the process of developing an upscale condo development in Toronto and Rogers is currently building a massive residential community in Mississauga.

Why Go From Cars to Condos?

The reason behind so many non-develoeprs moving into real estate is likely that many of these luxury brands are eager to cash in on the value of their reputations. These attempts at brand extension involve putting their names on products that are outside their immediate areas of expertise such as hotels, speedboats, clothing, and even steaks (something Donald Trump famously did).

Some brands who have done this well include Giorgio Armani and Versace– who opened five star branded hotels and residences in the last few years. Companies like West Elm and Restoration Hardware are following suit and have also announced or hinted at plans to open either hotels or residential properties in the next few years.

Before you buy, here are a few things you need to know about branded real estate and profiles of some high profile branded projects:

What Home Buyers Should Know About Brands Getting Into Real Estate

If you’re a home buyer, you should know that the majority of these endeavours involve the brand partnering with companies who have expertise in the new business sector rather than doing it themselves. The problem is that some of these brands are partnering with companies that don’t maintain the level of service or excellence that the brand has previously been known for and some projects have been connected with poor management or shoddy construction.

If a company is just licensing a brand and if the brand hasn’t been closely involved in the process, then there could be problems with quality. If you’re thinking about buying into a branded real estate development, it’s critical that you do your research into the builder to ensure that they’re reputable. It’s also important that you understand the level of involvement of the brand.

One thing to be aware of is that you might end up paying a little bit more to live in a branded building. While many of these buildings offer amenities that you might not be able to get elsewhere, it will be up to you to decide if you’re willing to pay for them through an inflated initial purchase price for the condo, as well as in higher maintenance fees.

Another concern is what might happen to your real estate investment if something were to happen to a brand. For example, if that brand were to go through bankruptcy or to experience a scandal, that could affect your home’s value.

The restaurant chain Nobu is synonymous around the world with high-end and delicious Japanese and sushi cuisine.  While the brand started with iconic restaurants in major cities like London, New York, Barcelona, and Malibu, Nobu has become a brand that focusses on hospitality and luxury hotels as well. The company has 35 restaurants and will have 15 hotels opening around the world in the next five years. Currently, Nobu doesn’t have any restaurants in Canada and their Toronto development will be their first time developing condos. One of the partners and investors on the project is actor Robert De Niro.

Their two-tower Toronto condo project, designed by Temple Architects, will be built on Mercer Street in the King-Spadina area with construction starting in 2018.  Both towers will feature 45 stories with 660 total condo units, a hotel on the top five floors, and Nobu Toronto restaurants on the lower levels. The price range will start at $400,000 and go up to $2 million.

The project has a number of amenities including an outside terrace on the 10th floor that connects the two towers. It will also have a gym with water therapy, hot and cold plunge pools, and steam rooms. Sushi fans will be happy to know that owners will be able to order from the Nobu restaurant and have their sushi rolls delivered right to their door. 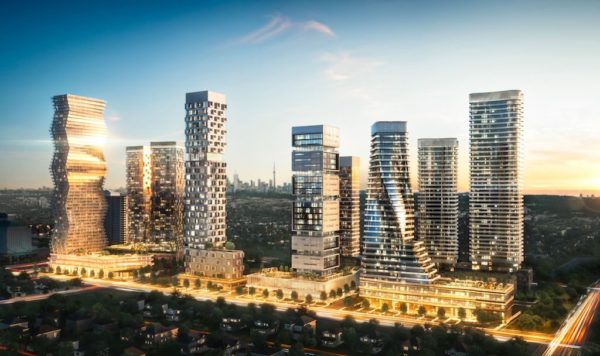 One of the biggest branded projects in the GTA will be backed by Rogers. In the 1960s, Ted Rogers bought a property in Mississauga with the intention of putting up a radio transmission tower but those plans never came to fruition. Recently, the Rogers family announced a $1.5 billion, 15-acre Mississauga condo project which will be located on the corner of Burnhamthorpe Road and Confederation Parkway.

The Rogers family, which has never been involved in a residential real estate project of this kind, has worked with New York-based design firm Cooper Robertson in order to design a 10-tower project. The plans specify around 6,000 units that will be either available for sale or rent with construction on the first phase beginning in late 2017 and taking 10 to 15 years to fully develop the site. The prices for the units will range from $200,000-$750,000.

M-City will be a community that’s pedestrian friendly with things like large sidewalks and on-street parking and will feature 2 acres of parkland. The development will also feature leased commercial space on the lower floors. The project will be integrated with the family’s other business and include Rogers wireless internet and cable TV technology. While the Miami condo project will be the first time Aston Martin has been involved in a real estate development, the car company has already extended their brand into areas like menswear, speedboats and high-end jewellery.

The 66-story residential tower will house 390 condos. Amenities will include things like a fitness center, micro-cinema, art gallery, infinity pool, and yacht marina. The cost of units will start at $500,000 for a one bedroom condo and go up to $35,000,000 for a penthouse with a private pool.

What Does As-Is Condition Mean When Buying a Home?

Amanda Reaume is a freelance writer who focuses on personal finance, credit, and real estate. Her work has appeared in the Vancouver Sun, The Windsor Star, and online at Forbes.com, Yahoo! Finance, ABC.com , Time.com, USAToday.com, FoxBusiness.com and many other sites.