How Much Are These 5 Classic Horror Movie Houses?

It’s no secret that real estate prices can be downright scary – in Canada’s hottest markets, ultra-hot competition and bidding wars can have even the bravest buyer running for the hills. But would you consider living in a stigmatized home (where a murder or other violent crime occurred) if it meant big savings?

Living on the site of a terrifying movie, however, seems to be a bit more desirable – check out these five classic horror movie houses, and how much you’d need to pay to own a piece of frightful film history! Don’t close your eyes or you’ll miss this cute-as-a-button house at 1428 N Genesee Avenue. Its charming white façade and red door are hardly horrifying – but Nancy Thompson faced down child murderer Freddy Kruger in one of its three bedrooms.

Other than preventing many a millennial from getting any shut-eye, A Nightmare on Elm Street paved the way for the slasher teen genre – and the Hollywood Hills West neighbourhood where it was filmed is steeped in movie legend, with a number of Nancy’s ill-fated friends’ homes located on the same street. This two-storey three-bed, four-bath home was built in 1919, and is currently listed for sale for $3,250,000.

The Amityville Horror house – the setting of the real DeFeo family murders and alleged subsequent haunting – is perhaps one of the most iconic horror movie homes of all time; just a glance at those infamous pumpkin-faced windows hints at evil forces within.

While Amityville authorities wouldn’t let the 1977 ghost thriller film at the actual location (that house was a stand-in, located in Toms River, New Jersey), the original site of Kathy and George Lutz’s 28 days of terror still stands – and was even recently put on the market.

While the exterior has since ditched the windows (and the red room is a reportedly a simple storage closet) it’s still a fairly legendary property, with waterfront access and a newly renovated boathouse. In today’s market, Realtor.com estimates the property could sell in the low $800s. 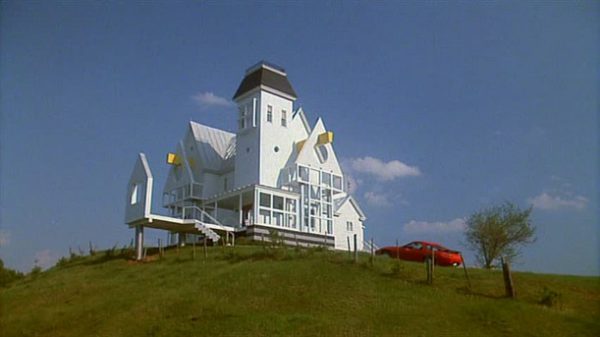 Talk about tenant-eviction issues! The Maitlands return from a trip to the home décor store only to realize they’ve deceased on route, and their beloved Peaceful Pines home has been invaded by – gasp – living homeowners. They bring in bio-exorcist Betelguese in to scare the breathers out – but, despite a troublesome giant sandworm infestation, the ghostly former owners and the Deetzes figure out how to co-exist peacefully under the same delightfully 80’s-gothic roof.

While Burton’s much-contested house on the hill was just a façade, the quaint village it overlooks is real; East Corinth, Vermont stands in for Connecticut, and has frightfully affordable real estate. This five-bed, two-bath 1800’s-era Victorian could be yours for just US$289,000. Say that three times fast and summon a realtor from the beyond! The baby blue house with cheerful clapboard siding and wraparound porch hardly hints at horrors within – but it served as both the interior and exterior location of Michael Myers’ madness. The Halloween house remains in one piece, at 1,000 Mission St in South Pasadena, CA, but it nearly became a victim itself, when developers snapped up the street to build condos in 1987. Intense lobbying from locals and move fans successfully moved the house from its original address of 707 Meridian Avenue to its new home by the railway tracks. Now reportedly the office of a massage therapist practice, it remains a mecca for horror fans, receiving hundreds of visits each year. Owning a home in this So-Cal neighbourhood will set you back a scary amount, though – comparable properties range between US$1.9 million – US$4.5 million.

While the 1999 remake of this tale of an evening party gone horribly wrong is set mostly in California sound stages, the 1959 classic features the exterior of the Ennis House, an architectural marvel created by Frank Lloyd Wright in 1924. Built in Wright’s textile block style in LA’s Los Feliz neighbourhood, it’s considered to be one of the best examples of Mayan Revival Architecture in existence, and has a California landmark and National Register of Historic Places status.

This three-bed, three-and-a-half bath home (not including staff quarters) has a sprawling 6,000 square feet of living space. A round of renovations in the 1940s added a 20 by 40-foot swimming pool and billiards hall. Sweeping views of Griffith Park offer peaceful green seclusion (or, in Ali Larter’s case, a means of escape), and the 0.5-acre lot wasn’t really the former site of an asylum for the criminally insane.

Listed for sale in 2009 for $15 million, the historic property languished on the market until 2011, when it was purchased by billionaire Ronald Burkle for a mere $4.5 million. Let’s hope he doesn’t use those savings to host any survival-of-the-fittest overnight parties.

4 Tips On How To Start Investing In Your Home