Owning a home is still an integral part of the Canadian dream, even as new obstacles face today’s aspiring buyers.

The 2018 edition of Zoocasa’s Housing Trends Report: Aspirations and Obstacles, which polled 1,431 respondents from across Canada, finds homeownership remains as top life milestone, even as new policies, rising interest rates, and heating prices continue to present hurdles to breaking into the market.

That owning a home is a significant rite of passage remains a strong sentiment among Canadians, with 86 per cent feeling it’s an important life milestone – an increase of 3 per cent from 2017 findings. While Boomers feel strongest in this regard at 90 per cent, agreement is high across all age groups, with 85 per cent of Gen Xers and 84 per cent of millennials feeling the same.

As well, the majority of respondents feel homeownership should be achieved by one’s late twenties or mid 30s. 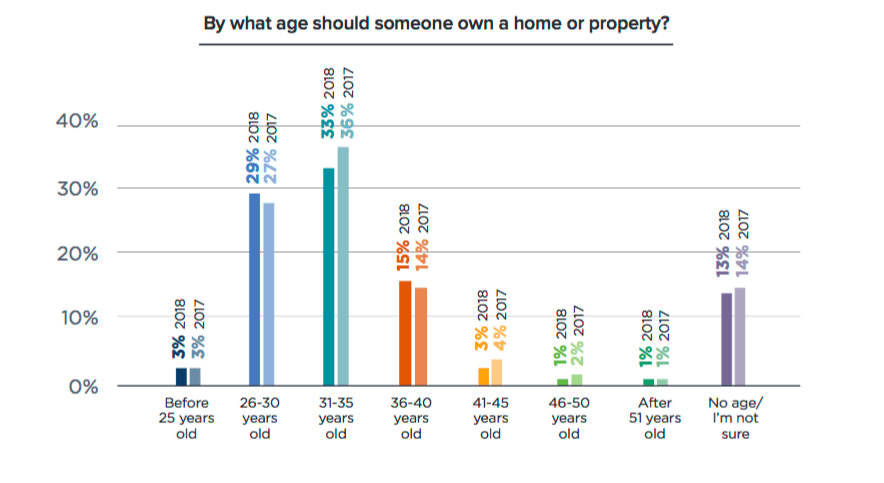 However, just because homeownership is perceived as an important step doesn’t mean it takes precedent over others; only 19 per cent of respondents said not being able to own a home would lead them to delay having their first baby, while only 13 per cent would put off getting married. Another 9 per cent stated it would prevent them from expanding their families with more children, while 6 per cent would delay getting engaged.

Affordability – or a lack thereof – continues to be the main obstacle for aspiring buyers, with 42 per cent indicating it’s their biggest barrier to homeownership. However, this has declined from 54 per cent in 2017, perhaps reflecting softer prices in some of Canada’s largest markets, which occurred over the second half of last year.

Respondents in Ontario reported a substantial drop in feeling blocked by rising prices, from 62 per cent in 2017 to 47 per cent this year; the average home price had fallen 14 per cent year over year as of March, following the Fair Housing Plan, which was introduced by the provincial government to calm real estate conditions in the Greater Golden Horseshoe region. Saving for a Down Payment is a Top Struggle

For those looking to make the leap from renting or living at home to homeownership, it’s becoming increasingly difficult to save the necessary funds for a down payment, as rising interest rates and rental prices squeeze Canadians’ abilities to carry shelter costs.

This is increasingly keeping would-be buyers in the rental market, with not being able to save for a down payment cited as the top reason for renting (33 per cent). Another 29 per cent feel renting is cheaper, while 26 per cent feel they wouldn’t be able to carry the cost of monthly mortgage payments. Not surprisingly, British Columbian renters – where the average one-bedroom condo now tops $2,000 monthly – are having the toughest time making the leap from renting to homeownership at 53 per cent. This is followed by Atlantic Canada, at 29 per cent. Quebec renters, however, seem to have the easiest time making the transition, at only 10 per cent citing the inability to save as a reason for renting.

The Bank of Canada, which sets the cost of borrowing for lenders across the nation, has been on a hiking trend, increasing its Overnight Lending Rate (which in turn increases banks’ Prime rates) three times between June 2017 to January 2017. This has effectively doubled the benchmark for interest rates, from 0.75 per cent to 1.25 per cent.

While this immediately impacts borrowers with variable-rate mortgages, lenders have also followed suit by increasing their posted five-year fixed rates, which in turn increases the benchmark rate used to stress test potential buyers.

There has been much expert commentary that a rising interest rate environment will contribute to a slower market – but have buyers truly been dissuaded?

According to survey findings, rising interest rates did not materially impact those who bought a home over the last 12 months; while 28 per cent stated the threat of higher rates prompted them to make their purchase sooner, a full 56 per cent said it did not impact their original buying timeline. Only 9 per cent of buyers delayed their purchase as a result, while 7 per cent were not aware of rising rates at all.

However, those who have not yet made their home purchase are more likely to be impacted – 35 per cent have changed their buying timelines, while 30 per cent feel discouraged from buying a home. How does Canadian real estate stack up as an investment? Given its steady appreciation in value over the past decade – even as a recession took its toll – and stable returns, it remains a highly coveted asset.

Of all respondents, 8 per cent indicated they own an investment property:

Detached homes and condos are the most popular form of real estate investment, at 39 per cent each, followed by semi-detached homes at 12 per cent. Just 5 per cent of respondents said they invested in a vacation home, while 9.5 per cent have invested in land, and 8 per cent in townhouses.

By age group, Boomers were most likely to own an investment home at 5 per cent, followed by Gen Xers at 9 per cent, and millennials at 4 per cent.

Check out the full findings from Zoocasa’s 2018 reports:

A Whole New Take on High-Rise: What Legal Pot Means for Renters and Condo Owners