Priced Out of the Detached Home Market? Consider Townhouses 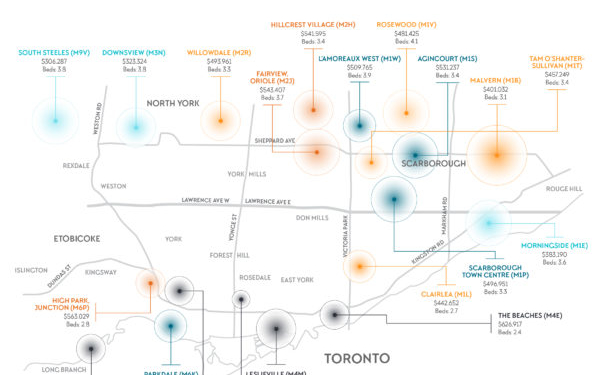 The number of homes for sale is scarcer – and more expensive – than ever before in Toronto’s real estate market, but that doesn’t seem to dissuade buyers. Regardless of rising prices, mortgage rules and tight supply, they’re determined to enter the market at any cost. It’s a dichotomy frequently played out in housing headlines, as new data sheds light on the factors behind heating markets.

So what is the emerging real estate reality for buyers – and will they continue to enter the market in droves? A few new reports illustrate the latest challenges for would-be homeowners – and their options.

Does your wish list include a brand-new, single-family home with yard? You can expect to pay more than $1 million for that dream home in the Greater Toronto Area , whether it’s detached, semi-detached or a townhouse, reveals the latest report from the Building Industry and Land Development Association (BILD). According to their findings, which were gathered by Altus Group, the average price for all newly-built “ground-oriented” homes hit a new record of $1,028,395 in January.

BILD President and CEO Brian Tuckey emphasizes that a sharp decline in the number of new homes is responsible for spiralling prices. There were only 1,524 new ground-oriented homes available for purchase in January – a record low – compared to a whopping 18,400 in January 2007. That’s a 1,107% decrease! There were even fewer new detached homes available for sale, at 534, compared to 12,242 in 2007.

“The GTA is facing a severe shortage of housing supply particularly for single-family homes, which sell as soon as they come to market. When there aren’t enough homes to satisfy demand, prices increase and that is exactly what has been happening in our region over the last decade,” he stated in BILD’s release. He adds there are a number of reasons behind the shrinkage, including “Lack of serviceable land, excessive red tape, and frequent delays in the development approval process,” as well as an increased builder focus on higher-density housing as per the province’s mandate.

“Our industry is implementing provincial policy by building more condominium apartments and less ground-oriented housing. A decade ago, condominiums represented just 42% of available inventory compared to 88% in 2017,” he says.

Demand for condos has also surged, up 11% in January, at 1,199 units sold. Patricia Arsenault, executive vice president of research consulting services at Altus Group, says rising single-family home prices has contributed to the increase in condo buyers, among other factors.

“Among them, end users who prefer the locations and amenities afforded by condominium apartments; families who might have opted for a single-family home, but have been shut out of that segment due to lack of available product; and investors who are the key providers of new rental supply for the GTA’s growing population,” she states.

Townhouses: An Answer for the Missing Middle?

One of the most pressing issues for prospective buyers is the lack of affordable middle ground between condos and the detached market. While the Toronto Real Estate Board reports the average resale condo can still be had for $407,409 in the 416, compared to $1,336,640 for a detached home, most units have too-small square footage for move-up buyers’ needs.

Toronto townhouses are growing increasingly popular for this group, according to 2016 sales data recently compiled by Zoocasa, with the average unit (including new and resale) available for $562,187, which is still within the realm of affordability for many buyers. Check out the map below for the most affordable Toronto neighbourhoods for townhouses (See our full list below). Despite these dire warnings of high prices and slim pickings, today’s crop of buyers – and particularly those in the millennial generation – remain determined to enter the market. A new global survey released by HSBC finds that while 34% of Canadian millennials own homes – slightly lower than the 40% global average – as many as 82% intend to buy a home within the next five years.

To manage it, they’re resorting to a few different tactics including borrowing from the “bank of mom and dad”; 37% of millennials turning to parents to help fund their down payments, and 21% returned to live with their parents in order to save up for a home purchase. The 2016 edition of RateHub’s Digital Money Trends report also found 44% of millennial first-time buyers relied on family to help fund their down payments.

They’re also willing to break the bank, with 27% not having a set budget and 53% reporting they only have an approximate amount in mind. Of those who had purchased within the last two years, 42% reported going over budget – whatever it takes to achieve homeownership!

Probably most telling, 37% said they would consider buying a smaller-than-ideal home (compared to 21% globally).

“Despite a strong desire to take the homeownership journey, the findings also suggest that Canadian millennials face some significant barriers, with more than two thirds (70%) saying they haven’t saved enough for a deposit, nor do they have a firm budget in mind,” stated Larry Tomei, executive vice president and head of retail banking and wealth management at HSBC Bank Canada. “The reality is, it’s a challenge – and so I can’t stress enough the importance of having a good plan that includes getting the right financial services advice and support before and after you buy.”

Maximum Home Affordability based on that income = $636,886

How Real Estate Taxes and Fees Differ Across Markets