Are We Ruining Our Skylines? | Glass Condos Define Horizons As skyscrapers shoot up year after year, skylines in Canada’s largest cities (and other metropolises) are constantly changing. In recent years, Toronto had the most concurrent condo developments of any city in the world.

We’re consistently reimagining our skylines. But are we doing it right?

“It pains me that so many architects today consider making a box—and sometimes cutting off a corner for an entry—and covering it with products to be a design,” he says. “Those are 20th century ideas. While they have served architecture well, our cities’ citizens, and the residents of such buildings, yearn for and deserve more.”

Gage believes the good designers are not “product pickers,” meaning architects who develop those simple glass condos we see more and more. “They care about what they’re doing and work their projects to death before they release them. Good design can be easy. Fun design can be easy. Great design is difficult.” Mark Foster Gage Architects is now working on a new project, aptly named the Michelangelo Tower by local media. The building, planned for West 57th Street in New York, would stand at 102 storeys and will have an incredible view of Central Park.

The height, however, is not what defines this building. Because of Gage’s firm belief in designing unique architecture, it should be no surprise that the Michelangelo Tower is adorned with ornate wings and embellishments, creating a truly unique building with a nod to architecture of the past.

“Design is thinking of a great many things, like how a building appears from different distances or, in this case, how to make each floor unique to the owner,” he says. Meaning each suite’s view will not only change due to their placement in the tower, but also the unique architecture outside their own windows. A building like this is, of course, for a wealthier buyer. On the 64th floor, for example, the building would have its own sky lobby, offering private access retail space, a two-storey-high ballroom for events, and a four-star restaurant.

Although Gage’s design may not be for everyone, it at least evokes a reaction. If you think of the majority of skyscrapers in Canada’s largest cities, it may be difficult to recall one that evokes a strong reaction based on identity and shape, rather than height.

And as ambitious as the Michelangelo Tower is, it could be created today.

“Our primary interest wasn’t symbolism, as might have been the case with such sculptural forms a century ago,” he says. “It used to be that to have sculptural stone, you needed to hire stonemasons for years, so a project like Chartres Cathedral took decades.” 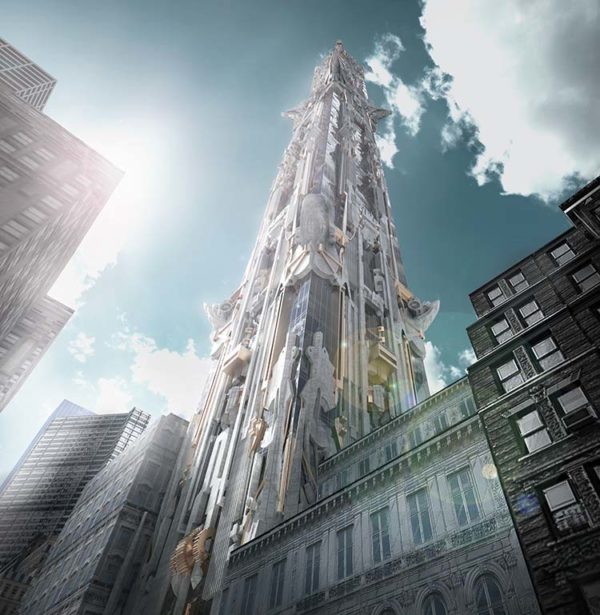 Now, intricate stone designs on the luxury building could be created much quicker using computer numerically controlled (CNC) technology. And with technology advancing in CNC and 3D printing, the sky’s (literally) the limit.

“People are beginning again to seek actual uniqueness, even beauty, rather than just allowing their residences to be generic real estate equations in the sky,” says Gage.

As buyers, you can make a difference in encouraging architects to think bigger. It may seem out of your hands, but if enough voices and actions are made, designers will have to accommodate.

“Condo dwellers should vote with their feet and stop buying units in banal buildings. To some extent this happens already, in that better-looking buildings fetch higher price-per-foot in terms of sales, which is true even if the buildings cost the same amount to build. Developers should be more conscious of design’s ability to increase their profits, and buyers should be aware that units in more significant and beautiful buildings will hold more value over time.”